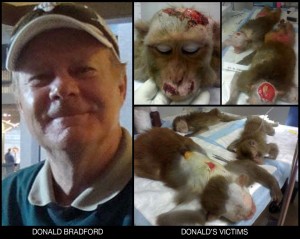 On June 24th, a crowd of protesters forty strong converged at the entrance of Donald Bradford’s gated community. Donald is the president of Primate Products, a sick company that imports and breed monkeys for use and abuse in painful and useless experiments. As Donald sees it, the roughly 1,500 animals enslaved at Primate Products are nothing more than objects to be converted into money, their bodies “good to the last drop.” And to his delight, Don profits from the wholesale slaughter of these monkeys without the hassle of having to witness their pain or hear their cries. It is crucial therefore that we carry those cries to Donald’s ears and speak out in defense of his victims. 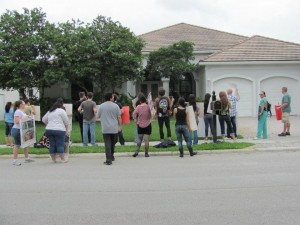 Because the gate of the community was wide open and there was no sign that forbade entering the premises, we walked right in. With justice on our minds and the compassion we feel in our hearts for Don’s suffering victims, we marched directly to his house. We chanted loudly outside his blood money home until the police made us leave.

Throughout the neighborhood, residents expressed their strong support for what we do.  They told us to go ahead and “shame him.” Another said she had already heard of Donald Bradford and the evil life he lives. She said she hates him. Still another said they would continue to report him to the homeowners association so as to have him removed.

We handed out nearly 200 fliers to interested passersby. The leaflets included Donald’s name, address, and a description of his moral crimes

We serve as that sick man’s missing conscience. We promise to keep coming back. Bradford’s evil must be continually exposed and confronted.

As a side note: we later found out that Bradford warned the security guard at the gate that we would be coming and he directed him not to let us in. No such luck, huh, Donald.