Published in “The Ecologist” February 2003 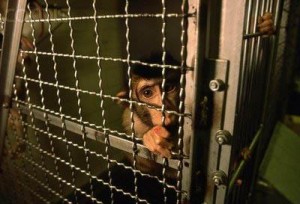 To the dismay of many of my friends, I’m not unalterably opposed to vivisection. In fact, I’d wholeheartedly support it, were vivisectors to make one minor administrative change. It would be that scientists perform the experiments not on nonhumans but on themselves and their colleagues. Scientists keep telling us how beneficial the experiments are for Science with a capital S, Progress with a capital P, and of course Man with a capital M. If the experiments really are Necessary with a capital N, the scientists should be willing to make this sacrifice (with a small s) for the greater good. In any case, because of strict regulations, according to no less an authority than Lord Sainsbury, British Science Minister, advocate of genetic engineering and owner of a very large supermarket chain, experiments generally cause no more than “moderate” suffering. If this is actually true, scientists shouldn’t too much mind throwing their hats into this ring.

Now, I’m sure you can spot the problem: too many important experiments for the number of vivisectors. Just in Europe an animal is killed every three seconds in a laboratory. In Britain it’s one every twelve seconds, in Japan one every other second, and in the United States one per second. I’m not sure even full-ride scholarships and high salaries will suffice to bring in enough scientists to fill this bill. But that’s okay, because every problem carries within it the seed of its own solution.

The solution comes through the words of Sainsbury, or rather his existence: add another category of those eligible to be vivisected. This would, of course, be those politicians who speak or vote in favor of experimenting on live animals. Given the importance of these experiments to everything from the economy to national security to shiny-clean hair to new cosmetics, I think the politicians will be glad to serve the public in this manner.

Unfortunately, this won’t entirely solve the problem: I just don’t think we have enough politicians (and I’ll bet you never thought you’d hear someone say that).

At first I toyed with the notion of putting vivisectors’ families on the short list, but decided to keep them in reserve in case they’re needed to provide “spare parts,” as the xenotransplantation literature so elegantly puts it, for those humans rich enough to afford their own personal organ donors. The use of vivisectors’ families should eradicate the technical and moral problems caused by the current planned use of pigs, and should also bring in some extra cash for the corporations that hire the vivisectors (and that’s always been the real point, hasn’t it?): some estimates put the market for pig organs to transplant into humans at $6 billion per year, just in the United States.

But we still have the problem of numbers, don’t we? Not enough vivisectionists, not enough politicians. Naturally, CEOs of companies that profit from vivisection need to go on the list, and in these desperate straits—how could we possibly live without draize eye tests?—I think we’ll just need to add everyone who works for those companies, too. Certainly the stockholders. Especially the stockholders.

I suspect, however, that we still won’t have enough: our culture’s appetite for subjects on which to inflict “moderate suffering” seems insatiable. We need to forcefeed agrochemicals and drano to dogs through tubes directly into their stomachs, and we need to transplant the hearts and kidneys of pigs into the necks of baboons. We immobilize monkeys, lizards, cats, dogs, take off the tops of their heads. We break the necks of baboons. We addict macaques to cocaine, electroshock them if they will not use. We create superviruses that kill everyone they contact. We cut out portions of the brains of marmosets, and leave them as stupid as the experimenters themselves. We cut off the heads of live animals using scissors, then study their brains. We put live animals in freezers and let them try to claw their way out. We teach chimps American Sign Language, then put them in cages the size of cupboards: when they sign they want out, we ignore them, inject them with pesticides. We separate monkeys from their mothers, give them HIV, then put painful coils in their eyes to track where they look.

There are simply not enough CEOs and stockholders. I’ll bet you never thought you’d hear someone say that, either.

But I’ve got a plan. Make vivisection duty mandatory for every human who supports animal testing. We are, after all, animals. It will be just like jury duty. You get a note from the county advising you your turn has come, and you are to report next Tuesday. You call the evening before to see if the experiment has been cancelled. It hasn’t, but you learn they only want males. You are, so you show up the next day. You learn you’ll be testing Viagra. Good, you say. I don’t need it (you hasten to add) but what can it hurt? You soon find out. You take the drug. Instead of cutting off your penis, as happened in experiments on beagles, rabbits, rats, mice, and monkeys, the vivisectors (who at the very least have no testicles, else they would surely refuse each time they were told to torture another) cut open your penis and insert an electrode into a branch of the pelvic nerve. They pass a charge through for a minute at a time, causing erections. They then measure the blood pressure of the erection. Their hope is that viagra will help maintain the erection. It seems to do that, but you and everyone else concerned already knew that from many previous tests. Can I go home now? you ask, your opened-penis smarting. Oh, sorry, they say. We forgot to tell you: afterwards all subjects are sacrificed.

You’re not too happy about that. But that’s okay, you can say as they put the final needle in your arm. Animal experimentation is extremely important, the suffering only moderate.

3 thoughts on ““Vivisection: A Moderate Proposal” by Derrick Jensen”