What do you see as the way forward for the animal rights movement? 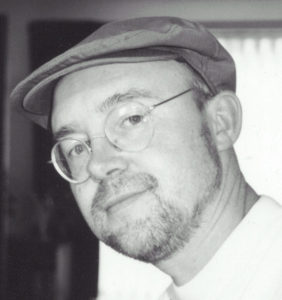 I think a lot of changes are needed. The type of campaigning that has been going on hasn’t been particularly effective- marches and demonstrations outside of laboratories and other animal abuse establishments haven’t been very effective. There are two ways in which the movement has to become more effective and more efficient.

First of all in terms of targeting the places that we are going to go for. If you try to campaign against too many places then what happens is not enough pressure gets brought on anyone of them to actually force change or to actually force the place to close. Animal abuse establishments really only close down after a concerted campaign and after pressure has been built up against them by repeated activities.

The other thing is that it is important that the chosen targets are places where some sort of victory can be achieved in the fairly near future. If you choose targets that are difficult, it’s going to be so long before any victory is obtained that the people involved in the campaign will become despondent and a lot of them will drop out.

I would say that an example of a very easy, winnable campaign would be a campaign against a local fur shop. Now, if you get enough pickets outside that fur shop, and deter enough people from going into the shop or persuade enough people, that fur shop is going to close because they are no longer going to make a profit. So that is quite easy for a local group to do.

On the other hand, something like closing down a meat factory would be very, very difficult because the public’s demand for meat is still very high. Doing demonstrations outside a meat factory isn’t going to close it, because that type of animal abuse still has so much income and support from the public.

To get rid of the fur trade, what’s needed is campaigning. To make inroads into the meat trade, what we need is education to persuade more people to become vegetarians and vegans. So you approach each target differently according to the situation of that particular place. 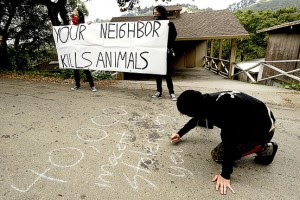 Another example of where a successful local campaign could be mounted would be against vivisection. Even against a big vivisection laboratory. If you campaign against vivisection at a particular establishment using a type of campaign that puts attention on individual vivisectors, like harassing them personally, going out side their homes and disrupting their personal life, then you are going to stop those people, eventually you are going to stop those vivisectors from vivisecting because they just won’t be able to take the pressure anymore.

You are going to have to target a lot of individual vivisectors before you close the lab, but all the time you are achieving these small victories of vivisectors who stop doing it, you are cutting down the number of vivisectors, you’re making it very uncomfortable for anyone to vivisect in that place. So your getting all those little victories along the way to the big victory and that encourages people. It is very important for the movement to have victories and it is very important to carry out the type of campaigning that yields victories.

So I have told a little bit about targeting. The other thing regarding targeting is frequency of actions. Sometimes people seem to carry out activities for their own personal conscience or for almost a semi-religious reason of “bearing witness” against something, rather than to actually put pressure to close the place.

For instance, there have been quite a few cases where people hold one demonstration a year outside a particular establishment. Now that really does no good at all because one demonstration a year outside of the gates of a lab is not going to close the lab down. If anything, the vivisectors are just going to laugh at it. Ok, you might make a few people become anti-vivisectionists if it gets publicity. But the question really isn’t “are these things totally ineffective?” because nothing is totally ineffective, everything you do in furtherance of animal rights has some positive effect, but the question is “how can we use the limited resources that we have in the animal rights movement in the most effective way?”

Demonstrating outside of a laboratory once a year is not the most effective way of campaigning and using the energy and time of the people involved. So I think frequency of campaigning against a particular place is important.

Secondly, the types of campaigning methods you use have to be the type of campaigning methods that exert the maximum pressure. Demonstrating outside of a vivisection laboratory does not exert maximum pressure on that place. You exert far more pressure by going outside vivisector’s homes. Because the difference between going outside a home and a place of work is tremendous in terms of the effects it has on the people that work there, and I am trying to encourage local groups to concentrate more on individual vivisectors rather than on the establishments where they work.

The same thing can be used in other types of campaigning, not just vivisection. The fur trade for instance, I’ve spoken about the way to close down a fur shop is to picket the place to cut down the profits, but there is no reason why people shouldn’t actually picket the home of the fur shop proprietor to actually put personal pressure on them. That’s a really good addition to pickets outside the shop. So that is something I am really working on a lot now in association with the Animal Rights Coalition, to try and get local groups to campaign more efficiently and more effectively.