Some leading scientists are warning pressure from animal rights activists is reducing the number of animals being brought into Britain for research.

All ferry companies and all but two airlines have stopped importing animals destined for research laboratories.

Former science minister Lord Drayson said that without such research “it is not possible to develop new medicines”.

But animal rights group Peta said 90% of drugs that passed animal trials failed when given to people.

Every year some 15,000 animals – mostly mice – are shipped in from abroad – usually because they have particular traits that make them useful for the study of certain conditions. They account for 1% of the animals used in UK laboratories.

Lord Drayson, who was a minister under the last Labour government, said animal research was “regrettably” necessary and that people would “suffer and die” without it.

“If we do want to have access to medicines, and I believe that we do – more than 87% of the general public consistently over the last 10 years in polling have said that they support animal research for medical uses. And so unfortunately we do have to do this.”

However, Alistair Currie from People for the Ethical Treatment of Animals (Peta) said researchers should work harder to come up with alternatives to animal testing.

“More than 90% of drugs that pass trials in animals fail when they’re given to people,” he said.

“They either prove to be unsafe or simply ineffective.

“And what we’re actually seeing at the moment is over the last 15 years or so the number of animals tested is going up but the number of drugs coming out at the other end are actually going down.”

The BBC’s Tom Fielden says animal rights campaigners have been jailed for taking direct action against laboratories in the past and more recently have focused on creating bad PR.

He says this has included letter-writing and web-based campaigns against transport companies, which appear to have had an effect.

BBC science editor David Shukman says the move by transport companies is a potentially serious blow to Britain’s standing as a major centre of research into serious diseases.

He says until now this has all been kept secret.

But the scientists who depend on the animals for their work have now decided to speak out, to try to persuade the government and the transport companies to stand up to the campaigners. 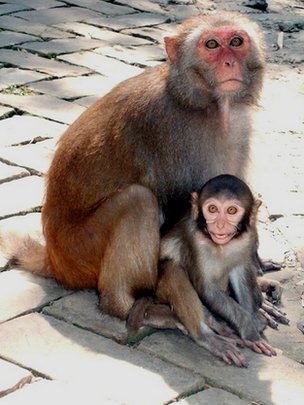 Macaques are among the primates most often used in medical research, such as on HIV vaccines

Professor Robin Lovell-Badge, a geneticist at the National Institute for Medical Research, told the BBC it was vital scientists were able to import animals, so they could collaborate with colleagues abroad.

“That’s very important – that you work with the same, try to understand, the same animal. This can be for assay development, where you need to have the same animal to test drugs and to compare drugs with other people working in other countries.

“It’s now getting to the point where enough companies have been intimidated and have refused to transport animals that we can see a potential worldwide impact of having problems of transporting animals between labs that will massively impact on the collaborative nature of research and will slow research progress,” he said.

“Our problem is they can’t be put in a suitable transport and just driven from country to country because we have the Channel in the way.

“And so with the blockade that is rapidly developing we’re essentially going to be isolated from the rest of Europe and that’s will have a huge impact on UK competitiveness and the very good work that is done in an awful lot of UK labs.”