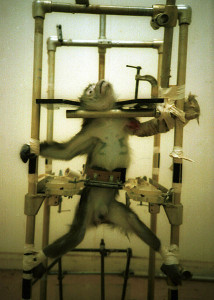 It’s been a strange week in monkey-related news here in Miami. On Wednesday, state investigators announced they had shut down a black market monkey emporium. Meanwhile, details of a second set of monkey-involved arrests are leaking out.

What’s next for our simian-obsessed city? Rage-infected apes escaping to start a zombie plague?

Miami-Dade Police confirmed that some activists were arrested while protesting Worldwide Primates, Inc., located at 16450 SW 180th Street. However, cops have yet to release an incident report. We will update with details as soon as they do.

At least eight members of Smash HLS were detained during the protest, according to Nick Atwood, a Smash member who participated in a similar picketing against Worldwide Primates earlier this month. The charges ranged from misdemeanors like disorderly conduct and criminal mischief to “throwing a deadly missile,” a felony.

“It appears as if a van was leaving the property. I guess there were exchanges between the van and the protesters,” Atwood says. “There have been minor arrests during previous protests, basically just for trespassing. But this is the first time that the police have arrested the group as a whole.”

Smash HLS has had success using novel, often funny ways to target companies involved in animal testing. But some strategies — such as protesting with megaphones outside the house of a 93-year-old woman’s house — have also drawn scrutiny.

The company’s website describes itself as “a leading supplier of premium quality non-human primate models for research, including government, university, and pharmaceutical level facilities.”

Atwood, however, says the company is evil. He points to Block’s 1995 federal conviction for illegally catching and selling endangered species — a crime for which Block was sentenced to 13 months in prison and fined $30,000 — as evidence that Block’s intentions are not in the right place.

Atwood says that arresting his fellow activists won’t stop his group from shutting it down.

“Matt Block has been involved in this industry for a long, long time, decades,” says Atwood. “He’s definitely aware of what he’s doing. He’s not just an innocent businessman. He’s well aware of where the monkeys are headed and what’s going to happen to them.”