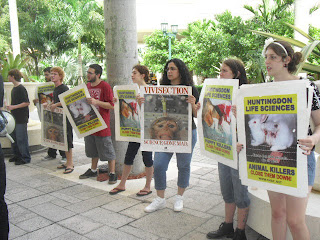 On July 6th passionate battle cries for the liberation of animals were heard across the usually sterile environment of downtownCoral Gables,Florida. A group of determined activists hit three locations Tuesday: the offices of Flagler, Stiefel Labs, and AstraZeneca, each connected to the vile vivisectors at Huntingdon Life Sciences. 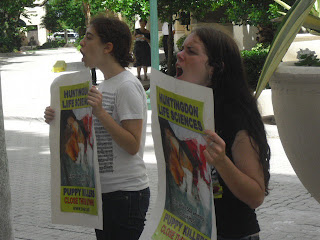 The first stop was the headquarters of Flagler, a subsidiary of Fortress Investment Group. No doubt, as the activists exclaimed, “Filthy Flagler” is to blame for the truly heartless and malicious slaughter of hundreds of animals each day. The group crusaded strong without any police intervention as employees from all leve 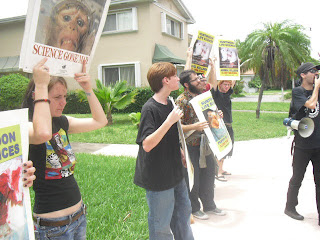 ls of the building peered out of their windows. The message was clear: Flagler must pressure Fortress to recall their blood money loan to HLS. Until that happens, Fortress and its shareholders and subsidiaries will remain targets. Incensed with the spirit of successfully having their voices heard, the next stop was Stiefel.

The protesters entered the purported office building of Stiefel Labs, a GlaxoSmithKline company, and demanded to speak with a representative. The guards insisted Stiefel had been shut down although their signs remained on the wall. Unsure of the reality, the protesters continued to chant and wave their signs. Whether Stiefel remained in the building or not, any supporter of theirs, past or present, is guilty of associating with animal killers, and the protest continued on. Once it was truly established that the Stiefel location had in fact, shut down, the fighters triumphantly celebrated “Hip Hip Hooray”!

Yet, it was the AstraZeneca protest that caused the most stir. Seven security guards at the office building cowered in worried stupor as onlookers curiously admired the protesters. The activists tirelessly demanded to know “how many animals died today?” and reminded AstraZeneca that these products are “their drugs, and their fault”. The group was told by private security that they could not protest outside of the building, but insisted on being told by official police. After a solid 20 minutes of relentless chanting, three police cars carrying six officers broke up the protest. The group was indeed on private property, but had certainly made their point.

The fight will continue until these companies sever all ties with the cowardly killers at HLS.

2 thoughts on “AstraZeneca and Other HLS Enablers Protested”