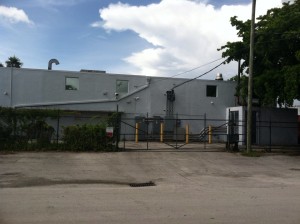 (Doral) – The workers are gone, the lab specimen boxes have been removed, and the cages that held as many as 500 monkeys are empty. Animal activists with the group Smash HLS are celebrating what has become obvious: Primate Products has closed the doors to its monkey quarantine/holding facility in Doral (7780 NW 53rd Street). For the first time in more than 25 years, the building is empty.

Primate Products, Inc. imports, breeds and sells monkeys for use in experiments to universities, the U.S. military and to pharmaceutical and contract testing companies. The company operates a monkey breeding facility in Immokalee.

“The official line may be that the company is consolidating its operations, but we know that they would not have made this change without our aggressive protest campaign,” said campaign organizer Gary Serignese. “An import company would not abandon a facility close to the international airport unless it felt it had no choice. This victory is proof that a small group of determined activists can make change. We hope that our style of activism becomes a model for others.”

Smash HLS held its first protest targeting the company in May 2010 and since then has held dozens of loud protests outside the Doral facility and employee homes. Primate Products has lost customers and employees as a result of the campaign.

“When I first learned that hundreds of monkeys were imprisoned in a warehouse in Miami, I had to get involved in the campaign,” said Miami resident and protester Ana Kowalczuk. “It’s not only that I didn’t want this place in my backyard, I didn’t want it in anyone’s backyard!”

Supporters of Smash HLS will meet soon to determine what’s next for the protest group.

A campaign timeline is available upon request.