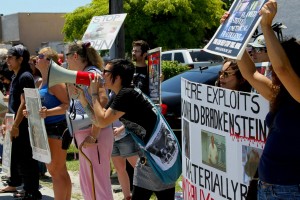 On June 12th, a large crowd of dedicated activists descended upon Primate Products. About 35 people inspired by the just desire to free the imprisoned monkeys inside yelled, chanted, and even confronted the exiting employees. As our numbers swell- we had 60 people outside the home of the Operations Manager, John Resuta, on June 3rd– we renew our promise to fight until the hell-hole that is Primate Products is shut down forever. At one point, eleven police cars were on scene. John Resuta and all the other degenerate employees are responsible for the horrific torture and murder of defenseless primates. We will continue to remind them of their shame. Our protests will be when and where they least expect them. 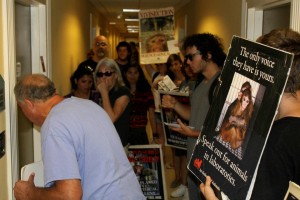 Immediately afterward, many activists next headed to the Miami office of EL AL Airlines. Despite their September 2010 decision to stop transporting monkeys for use in experimentation, they now say they will transport 40 young monkeys born in captivity. We made it up to their 3rd floor office. But the woman inside refused to open the door. We had to communicate our concern to her with the intercom and through loud chanting. People throughout the building peeked out of their offices to see what was going on. We made sure to hand each of them a leaflet. We also left fliers all over the 3rd and 2nd stories. EL AL has a choice to make, and the world is watching. Don’t stoop to the low of transporting these monkeys. Instead, hold true to your word and forever end you involvement in the cruel primate trade!