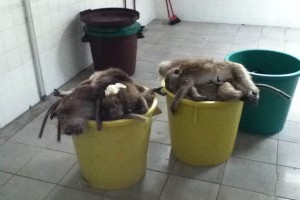 Dozens of dead ­monkeys lie piled high in buckets… all killed ­because they weren’t the right size for testing in British laboratories.

The animals were healthy and many could have been released back into the wild.

Instead they were given a ­lethal injection in the heart, dumped in bins and then incinerated.

The horrific slaughter has been uncovered in an ­investigation by the British Union for the Abolition of ­Vivisection (BUAV).

It is taking place on the holiday island of Mauritius where ­monkeys are plucked from the wild then exported to UK firms, which pay up to £260 for each one they buy.

Around 125 monkeys are killed at a time because overseas laboratories only want ­those weighing less than 3.5kg. But farms in Mauritius have a surplus of those above that weight so they are simply being killed off.

Campaigners say the pictures were taken inside a farm operated by Noveprim Ltd, which runs breeding centres on the Indian Ocean island.

The company is 47 per cent owned by Covance UK, a research and vivisection organisation based in Harrogate, North ­Yorks.

Countries which import ­monkeys from Noveprim include the UK, Spain and the US.

Last year Noveprim director Bruno Julienne said the firm was considering a cull to respond to “economic conditions” but pledged it would be humane. 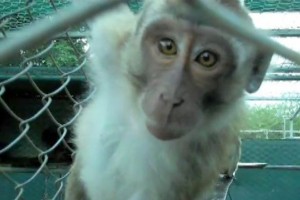 Campaigners believe a cull began at the beginning of the month and is set to continue until the end of November.

Yesterday Sarah Kite, of BUAV, said: “This is a cruel and senseless slaughter. It is ­unacceptable that monkeys are now simply ­discarded because they are of no further use. These monkeys should be released into the wild so that they can live out the rest of their lives freely. By importing monkeys from this company, the UK is perpetuating this appalling cruelty. We call on the UK Government to ban the import of primates from Mauritius immediately.”

Mauritius is the world’s second largest exporter of long-tailed macaques for research, selling up to 10,000 every year.

It was in September 2010 that a Sunday Mirror probe first ­revealed ­disturbing details about the trade there. It revealed shocking evidence of the cruelty involved in the trapping and breeding of wild monkeys.

Thousands of live tests are carried out each year in UK labs. Tests include horrific ­experiments where the animals are pumped with drugs to see how long they ­survive.Three-quarters of the monkeys are used for toxicology tests on new drugs.

The ­rest are used in studies for ­conditions such as Parkinson’s disease, Alzheimer’s and Aids.

Noveprim said they were investigating and would neither confirm or deny that the pictures were taken in one of their factories. Some animals were put down because they were diseased, a spokesman said.