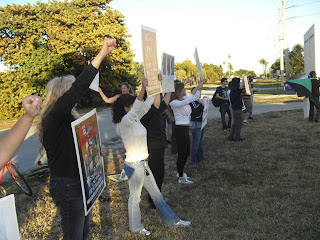 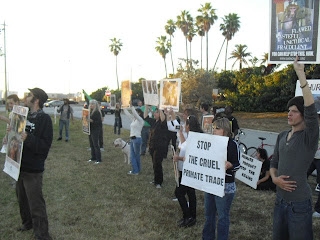 On December 17th, in solidarity with the Lab Animal Transport Global Day of Action, three dozen protesters gathered outside the headquarters of Amerijet International. This company has merited world-wide scorn for its unethical and inexcusable involvement in the cruel primate trade. As evidenced in a recent expose, Amerijet has violated the lax Animal Welfare Act at least thirteen times in the last three years. Their unfortunate victims have suffered inadequate ventilation and food and water deprivation, to name just two of the shocking realities of this vile cargo company. Obviously, Bassett, Amerijet, and HIG Capital will sink to crime in order to try to make an extra buck. Shame on all of them!

Protesters, filled with righteous rage, chanted their message so all could hear. Pitiful images of mutilated monkeys were shown to Amerijet customers and employees alike. How can someone with a conscience look and still do nothing?

One activist was arrested and held in jail for 20 hours. His charge was for wearing a mask on public property. The arrest was well timed. For at just that moment, David Bassett, president and CEO of Amerijet, tried to slink out of the building. But his sliminess did not go unnoticed. Dozens of passionate activists suggested he cut the company’s ties to the vivisection industry. Bassett, what will you do? Will you make the ethical choice and stop the monkey flights or stain your company with the blood of your innocent primate victims? If you choose the latter, crowds of protesters will haunt your headquarters as a constant reminder of those defenseless animals you choose to kill.

13 thoughts on “POWERFUL PROTEST OUTSIDE AMERIJET HQ- Another Arrest”