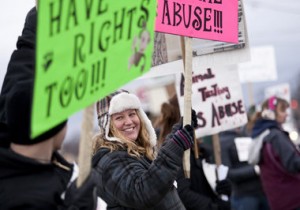 MUSKEGON — More than a dozen people gathered outside a Muskegon laboratory Thursday afternoon to protest what they alleged was inhumane medical testing on animals.

Carrying signs with slogans such as “Test on me, let them free” and “Animal testing is animal abuse,” at least 15 protesters gathered outside Northern Biomedical Research, 930 West Sherman, and said the company is acting unethically by using animals in its research.

“Somebody needs to fight for these animals that are being tested and trapped for the rest of their lives,” said Kara Moon, 27, of Norton Shores, who helped organize the protest.

In a written statement, Northern Biomedical Research said it complies with all laws and regulations in its effort to develop cures or therapies for diseases that affect the nervous system, such as Alzheimer’s, Parkinson’s and Lou Gehrig’s disease.

The statement goes on to say that the facility’s goal is to provide research “that will provide significant quality of life hopes for those who may suffer from the diseases.”

Kathy Hines, 46, of Muskegon, said Northern Biomedical should strive to find a way to perform research that doesn’t involve testing on animals.

“There’s other ways you can do it that are less expensive and more accurate,” she said.

According to an October 2008 U.S. Department of Agriculture research facility report, Northern Biomedical had a total of 88 dogs, 28 rabbits, and 162 “nonhuman primates.” Nearly all the animals were used in research where pain mitigation, such as “anesthetic” or “tranquilizing drugs,” were used.

The company declined to say whether the number of animals at its facility has changed since the 2008 report.

In its statement, Northern Biomedical said it respects “that individuals have a right to exercise their First Amendment freedom of speech.” But it also asks that its employees be allowed to “work uninterrupted in a neighborly environment.” 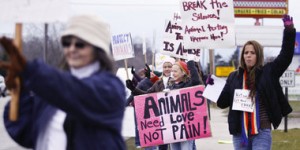 Moon said that as many as 25 people had participated in the protest around noon, although the number of people in attendance had shrunk to 15 or so by 2 p.m.

One of those toughing out the cold weather to deliver her message was Stephanie Bleich, 21, of Muskegon. She said she’s lived near the facility her whole life, but until now, had no idea what it was.

“It bothered me when I found out about it,” she said.

She and other protesters said their purpose was to raise awareness about the type of research being performed at the lab. Several people in attendance said they would like to see the facility shut down.

There are 30 animal research facilities in Michigan that are registered with the USDA, said Justin Goodman, associate director of laboratory investigations at People for the Ethical Treatment of Animals. He said Northern Medical is one of four facilities in the state that uses primates in its research.

According to the office of Extramural Research at the National Institutes of Health, animals have benefited medical research.

“What we have learned, and continue to learn, through research with animals, improves both human and animal health,” according to the office’s website.

“Research and discoveries made by NBR scientists have already conclusively provided medical benefit and hope to so many who suffer from debilitating illness and disease and has saved the lives of numerous friends and neighbors in the West Michigan area as well as others around the world,” the company said.