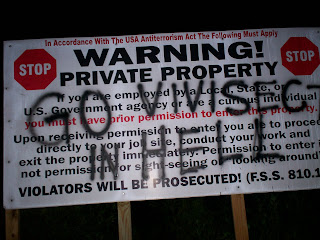 According to Primate Products, a 4-day workshop entitled “Primadaptation” begins today at their remote vivisection lab and primate breeding facility, which is called the Panther Tracks Learning Center (on account that its perimeter borders the Panther National Wildlife Refuge) located in Hendry County.

According to an anonymous communique received this morning, with the accompanying photos, its off to a rough start already: 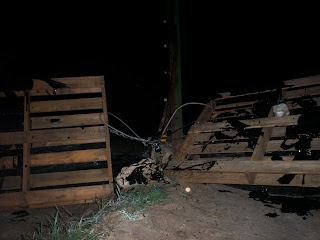 imate Products and Scripps Biotech at a remote primate testing and breeding facility in Hendry County… A road blockade appeared earlier this morning, obstructing potential participants in an animal testing conference scheduled this week in a remote location near the rural town of Immokalee. The blockade consisted of large debris, including tires, tree stumps, concrete block and pallets, interwoven with chain and cable, covered in tar which obstructed the entrance way to the laboratory facilities owned by Primate Products. A message left on a banner, read “Stop Primate Torture” and a sign was painted “Go Vivisect in Hell.” 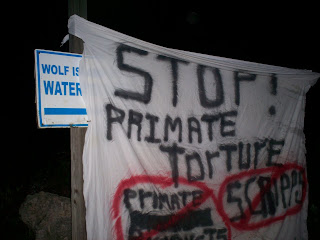 According to the program for the primate research conference, this week’s activities include trainings on “behavior modification” for primates, to make them into “willing workers” in scientific studies where they are tortured through animal testing practices including forcing diseases and drug overdoses, sensory deprivation and unnecessary biomedical procedures. The event also boasts classes on how to convince facilities to “buy in” on animal research. The PDF with details on the conference can be viewed on Primate Products website, www.primateproducts.com.

Several participants in this conference have been the target of animal rights advocates around the world, due to their records of profit-driven abuse and mistreatment of animals, including non-human primates, the closest known genetic relatives to human beings.

A messages was also left for Scripps Biotech, based in Palm Beach Gardens. If Scripps Biotech moves forward with plans to expand their laboratory facilities, using $579 million in public money, for vivisection and genetic engineering in Palm Beach County, they will become one of the largest animal testing facilities in the southern United States.”

For those thinking they’d like to attend, The cost for the workshop is $1095… If you have any further questions, the invite suggests contacting: