PPI only tortures and murders according to the letter of the law. 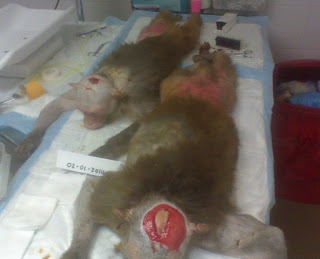 Last month, a series of leaked photos of macaque monkeys housed by a Florida laboratory caused a stir. The pictures showed several monkeys with gaping wounds, prompting protests by animal-rights activists, including the People for the Ethical Treatment of Animals, which wrote GlaxoSmithKline because the drugmaker had done business with the lab, called Primate Products (back story).

At the time, Primate Products ceo Don Bradford told the NBC affiliate station in Miami that the conditions depicted in the photos were not caused by medical testing, but due to injuries caused by the animals themselves, and that the monkeys have since healed. These monkeys are known to act aggressively toward one another. In any event, a complaint was filed with the US Department of Agriculture, which oversees animal welfare for research purposes.

Yesterday, the USDA posted on its web site the results of its inspection, which took place just prior to our previous item about this issue. The upshot? The agency did not find any ‘non-compliant’ issues (look here).

“It was a clean inspection report,” USDA spokesman Dave Sacks tells us. “There was nothing found that was against animal welfare regulations…Group housing of primates is allowed in the animal welfare act regulations….with the mindset that’s more closely adapted to how they live in the wild. These animals do various fighting among themselves for hierarchy….so that will carry through to how they are housed…But if in those housing situations, if there is a monkey that gets injured, we require the faciltiy to provide adequate care.”

For its part, PETA is not budging. “We are disappointed that the agency is not holding Primate Products accountable for the suffering that the mutilated monkeys in these chilling photos endured,” Justin Goodman, PETA’s associate director for lab investigations, writes us. “However, the company will continue to draw the ire of compassionate people for the harm it causes animals as a matter of course, including building torture devices, having animals ripped from their homes and families in the wild, and selling them to lives of misery and pain in laboratories.”

He also challenged the assumption offered by the USDA: “In the wild, monkeys do fight for social and evolutionary reasons, but severe attacks are not routine. The likelihood of violent fighting amongst captive primates is exacerbated dramatically when monkeys are not grouped appropriately and supervised adequately to insure that individuals are compatible.”