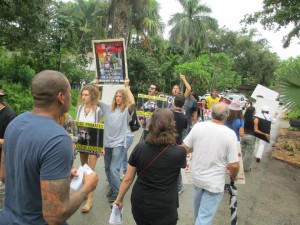 If you’ve been following the Shut Down Worldwide Primates campaign since its beginning, the name Yvonne Sanandres might ring a bell. In 2013, Smash HLS took the fight for animal liberation to Yvonne’s doorstep after learning of her affair with Worldwide’s founder, Matt Block. Matt and his wife (the company’s president) filed for divorce just weeks later, and tensions have been high ever since. Yikes!

For a while there it seemed like Matt and Yvonne were on the outs, but not anymore. The two have been spotted multiple times, and Yvonne was even seen bringing Matt a heart-shaped balloon on Valentine’s Day—ironic considering the tens of thousands of primate hearts no longer beating because of him.

Supporting animal abusers in any way—financially or emotionally—is unacceptable. As long as Yvonne is connected to Matt, she can expect to hear from people who oppose the death machine that is Worldwide Primates.

Contact Yvonne and kindly remind her of the blood on Matt’s hands!