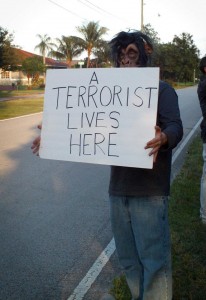 On the evening of October 22nd, over a dozen compassionate activists stood outside the home of primate killer Kathleen Turner. Kathy is the head vet at a vile company called Primate Products. As a vet, Kathy should be working to alleviate animal suffering, yet everyday when she goes to work she aids in their misery and death. Many neighbors, including one who joined the protest, were also outraged that a veterinarian would condone the atrocities inside Primate Products. Although Kathy was not home, we are certain our message will reach her.

After a hour and a half, we found a grassy area across the street where we waited patiently upon the return of the animal abuser. Shortly after Steve Turner, her husband, arrived home. We approached his vehicle with conviction. He very quickly reversed out of the parking area only to return 5 minutes later. The activists were still there and waiting. We spoke to him and made sure the message was very clear. Urge Kathy Turner to do what is right by finding a new job that does not involve torturing animals, or we will be back. The police arrived minutes later and Steve begged that we all be arrested for allegedly trespassing. To his surprise, no one was arrested. Although those who profit off the death of animals may not like first amendment rights, people with a conscience will always be there to speak for the defenseless animals enslaved in places such as Primate Products.