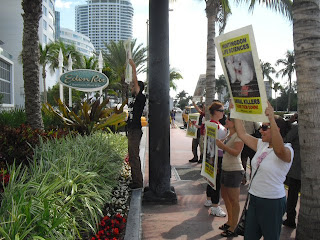 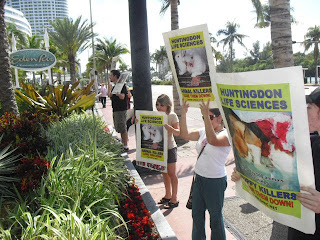 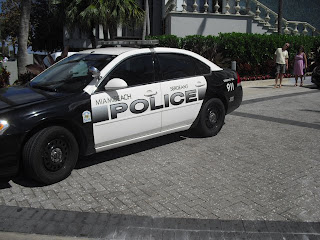 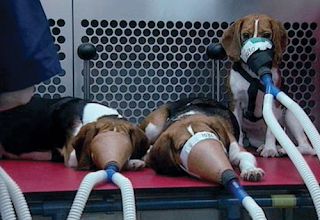 In beautiful Miami Beach, on famed Collins Avenue, animal killing AstraZeneca & Sanofi-Aventis were in attendance at BioNetwork East 2011. This “key industry biopharma partnering event” took place at the Eden Roc Renaissance (contact number 1-305-531-0000). And we were there too.

Before the protest began, activists went inside the building, during the conference’s lunch break, to talk with the executives and “active dealmakers” face-to-face. Colored leaflets describing the deadly reality inside Huntingdon Life Sciences were handed out. Most of the attendees were indifferent or insulting. One man said, “Get out of my face, buddy. I don’t want to talk to you.” Another scoffed and said his company doesn’t do vivisection on animals. They test on prisoners instead. This is the sick sense of ‘humor’ many of them have; their conscience untouched by the indescribable cruelty and death they are responsible for. Eventually security forced activists outside.

There, twenty protesters held signs and chanted. The faces of passers-by changed abruptly, signally their shock, when they saw the posters of the dead beagle puppy and mutilated rabbit, common victims inside HLS. These horrible pictures, capturing a dark part of reality many would like to ignore, must be a rare sight in Miami Beach. Tourists and locals alike were noticeably moved. About one hundred leaflets were passed out. And everyone was informed that Eden Roc Renaissance was hosting these cruel puppy killing drug pushers. Maybe they’ll reconsider any involvement in the future.

The whole time our lively protest was monitored by six police officers.