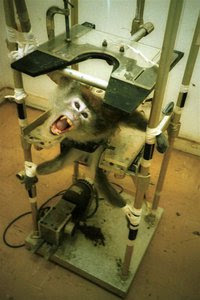 My phone conversation with Paul Houghton, co-owner of Primate Products Inc. and 40 year veteran of the biomedical research industry, began with a warning. He told me the call was being “monitored” and that it is a “federal offense” to “impact biomedical research” and personnel. With that said, we continued.

According to Houghton, vivisectors have the “moral high-ground” in the animal experimentation debate. That is because, in his opinion, humans have a “moral imperative” to wage a “war on human disease.” And this war cannot be fought and won without an astronomical animal body count. There are “no alternatives.”

At that point I asked him if he was certain that animal experimentation contributes to solving problems of human disease. Dr. Ray Greek, for instance, wrote in his book Specious Science, “Animal studies are not predictive of what will occur in humans, the extrapolation of results from animal models misleads scientists and harms human patients.” In response, Houghton definitively stated, “Absolutely” it helps with human disease. I then asked him if he could cite one cure that Primate Products was involved in. He admitted he couldn’t. But said there are no “single” studies that solve the problem. Instead, animal research continually creates the “building blocks” which will eventually lead to a cure. Eventually…

Houghton then commented that everyone wants to end animal research, since it is so expensive. I said that is one way of seeing it: another is to recognize that expensive to some means profitable for others. Many countries are involved in the exportation of animals for research- China and Mauritius for example- and they wouldn’t be happy to lose that business. Some airlines are still involved too. And Primate Products itself makes money from the importation of primates into the United States. Would you want vivisection to end, if it would involve shutting down your company? Houghton said he really wouldn’t mind. In fact, he said Primate Products is “actively looking for alternatives” to animal research even now. Too hard to believe? I think so.

That brought an end to the brief interview. We said our cordial goodbyes and hung up.

3 thoughts on “Paul Houghton: Vivisectors have the “moral high-ground””