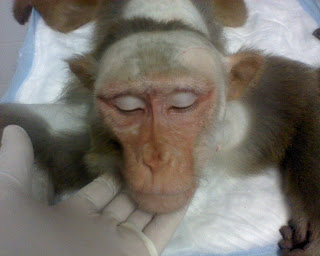 New pictures of injured animals from research labs used by GlaxoSmithKline (GSK), Merck (MRK) and Eli Lilly (LLY) illustrate — again — how the drug industry repeatedly fails to take opportunities that would improve its image. Most people agree that animal testing is necessary to make drugs safe, and the drug industry repeatedly rails against “criminals” who commit acts of “terrorism” — such as burning down a house owned by Novartis (NVS) CEO Daniel Vasella— in the name of the animal rights movement. But if that is so, then the industry owes it to animals to use as few of them as possible, and to make their lives as comfortable as possible before and after experiments.

That is not what is happening in Big Pharma’s contract research labs, however. Be warned, these images are disturbing. You can see 10 pictures of dead, injured monkeys at Primate Products, a Florida lab used by GSK here. The explanation of how those photos were obtained is here.

You can see some equally disturbing video of workers at Professional Laboratory and Research Services in North Carolina here, and at the end of this item. The staff there keep dogs and cats in small cages in a windowless room, where they wait until they are needed in experiments. One worker enters the cage area and shouts:

Go ahead and bark at me motherfuckers! … They act like they’ve been abused!

She then slams a cat in a cage door. PLRS is used by Bayer (BAYRY), Eli Lilly, Novartis, Merck, and Merial, the maker of Frontline flea and tick meds, according to PETA, which successfully closed the lab.

GSK did some dissembling over the Primate Products lab, telling Pharmalot:

A Glaxo spokeswoman says the drugmaker has not purchased animals from Primate Products since 2006.

But PETA supplied this document which clearly shows GSK sending 38 monkeys to Primate Products on Aug 23, 2010. Here’s a May 2010 GSK study on monkeys; and here’s one from January 2008.

Novartis’ Vasella got some sympathy last year when his summer home was burned down, his family grave desecrated, and his mother’s ashes kidnapped by animal rights activists. Those attacks continue. Novartis director Montserrat Ferrán Tarrés’ home was vandalized on Aug 1.

But until these companies force their contract lab vendors to clean up their acts — neither a difficult nor expensive task — it is difficult to sympathize with management over the animals who generate their wealth.