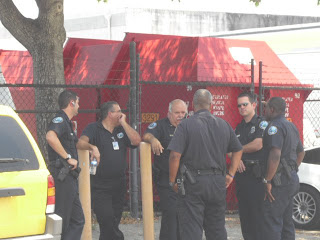 Spurred on by exaggerated claims made by Primate Products employees, DAY 4 brought out the police. Eight officers at first attempted to restrict our protest. They implied the nearest public property was two blocks away from PPI. We stood our ground. Finally, the city attorney came out and agreed we were already standing on public property.

Our demonstration continued without interference. Loud chants echoed throughout the industrial park. Without a doubt everyone around again heard of the evil shame surrounding Primate Products. 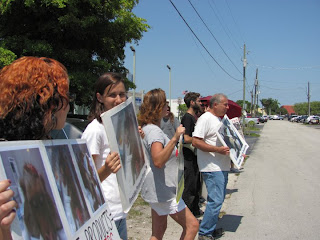 Although the protest was scheduled to end at four
three employees were still inside the building. We decided to wait them out. Our diligence paid off. After another two and a half hours and our pretending to leave, the employees tried to run as fast as they could to their cars. As soon as we heard them, we came running up the street, shouting into the megaphones. We never expected John Resuta and the others to expose their cowardice so plainly. All we were telling them was the truth: they are degenerate animals killers who must stop.