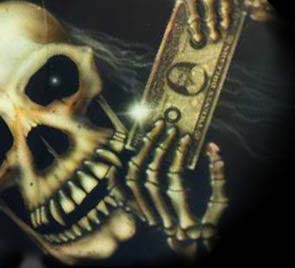 In solidarity with the Financial Focus Week of Action, South Florida SMASH HLS protested three companies that are linked to Fortress Investment Group: Legg Mason and Bank of America, both top four shareholders, and Flagler, a Fortress subsidiary.

Legg Mason was prepared for us. They’ve been accessing our blog from a computer with this IP address 216.251.209.#(The ISP is listed as Legg Mason Wood Walker).Dress suited security guards were standing cross armed near the entrance of the high-rise. They prevented us from entering the building. It is obvious that they don’t want activists to get to Legg Mason on the 15th floor, which happened last June. We loudly chanted with megaphones and handed out many leaflets. Eventually police arrived and ordered us to stop using the bullhorns. When asked what ordinance prohibits the use of megaphones, the officer said “disorderly conduct.” We moved on to the next puppy killing collaborator.

Just a few blocks north and we were in front of Bank of America. Once again we spread the word about Fortress and HLS with the use of our megaphones and leaflets. In short time, bank patrons were lined up at the windows looking out. Our message was heard loud and clear. From now on, when those people think Bank of America, they will also think animal abusers. After security forced us off the property, we went on to the next target.

At Flagler something unexpected happened. We had begun to get used to the private security guard who was hired to watch the entrance to the building. This time, however, he wasn’t there. As in June, we were able to make it up to the fourth floor office. There we asked to speak to someone about Flagler’s bloody connection to the puppy killers at Huntingdon Life Sciences. And…we were told to take a seat. With our signs, megaphones, and leaflets in hand, we sat and waited for a representative to come. Within minutes, some one came. He told us that since we didn’t have an appointment we would have to leave at once. When no one moved, he threatened to call the police. Surprisingly he got in the elevator with us and we got to talk. He explained that he is “very aware” of why we are there. He read all the signs at our previous protests, researched the subject, and had even visited many of our websites. He said that he has “forwarded everything” to Fortress. But since Flagler is owned by Fortress they “can’t do anything about it.”We told him to continue pushing Fortress to recall their loan. When we were back outside, he told us he is one of the VPs of Flagler. We chanted and leafleted for some time before finally ending our day of action.

We promise to continue the protests until HLS shuts down.