Note: Mauritius is a country from which Primate Products imports primates. 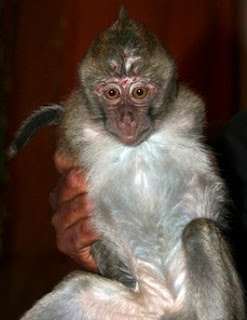 NAIROBI, Kenya – Wild long-tailed monkeys sustain broken limbs and other injuries when trappers catch the primates and transfer them to breeding farms on the island nation of Mauritius, said a new report released Tuesday.

Photos in the report showed handlers swinging monkeys by the tail and monkeys confined to small, rusty metal cages.

The Indian Ocean island nation has four major breeding farms and a fifth farm is to be opened soon, evidence that the trade is expanding, said the report by BUAV — the British Union for the Abolition of Vivisection — which calls itself the world’s leading organization campaigning to end animal experiments.

“Monkeys are highly social and intelligent animals with strong family ties. Their brutal capture from the wild and forced captivity in Mauritius is morally unacceptable,” said the BUAV’s Sarah Kite. “We call on the government of Mauritius to put an end to this brutal trade and for the USA, European Union and Israel to ban primate imports and stop perpetuating this appalling cruelty.”

The Associated Press contacted several government offices in the nation off Africa’s southeastern coast to seek comment on the report. When AP asked a question of an official in the Ministry of Agro Industry and Fisheries, which oversees wildlife, the official hung up. Another official said government employees are not permitted to talk to journalists.

The report, “Mauritius: The trade in primates for research,” said Mauritius justifies the catching of wild monkeys on the grounds that the long-tailed macaque is not native, is a pest and is not deserving of conservation concerns.

The United States is the largest importer of primates from Mauritius, the report said. In 2009, 3,179 long-tailed macaques were imported into the U.S., including wild-caught animals.

BUAV investigators found that a trapper kept one young male in a small, bare wire cage.

“The animal was clearly terrified, yet the trapper routinely removed him from the cage and tormented him by picking him up and swinging him around in the air by the tail,” the report said. “This particular primate also had injuries to his forehead.”

The primates are exported for research purposes and to breeding farms overseas, including in Spain, Israel and Puerto Rico, the report said.

The report said that primates are intelligent and highly involved animals who share many characteristics with humans.