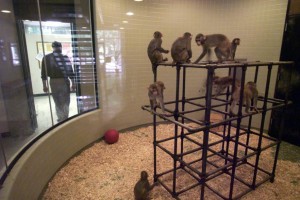 The announcement stunned outside researchers, because it comes a year and a half after Harvard began investing significant time and resources into the New England Primate Research Center in Southborough, to correct animal care and oversight problems that had resulted in the deaths of four monkeys between June 2010 and Feb. 2012.

The US Department of Agriculture investigated the center and cited Harvard for violations of animal welfare rules, an embarrassing black eye that caused consternation across the university. But medical school leaders said the decision to close the primate center was unrelated to its previous problems.

“It’s very, very disturbing, disappointing, disheartening, shocking,” said Nancy Haigwood, director of the Oregon National Primate Research Center, who was informed of the decision by the Harvard center’s director. “I think it’s going to be very, very difficult to imagine that the investigators impacted by this decision will be able to keep up their momentum. We’re talking about very talented senior investigators who are at the peak of their careers.”

Haigwood said the decision would, at the least, slow down the pace of research into diseases that affect human health and might lead scientists to leave the Boston area to pursue their projects. The primate center is known for its research on infectious diseases, such as AIDS, and neurodegenerative diseases such as Parkinson’s disease.

Harvard Medical School leaders said they were working on a transition plan to help the 20 faculty, 32 post-doctoral researchers and graduate students, and 150 staff find new positions while continuing to do their jobs to support the animals and research as the center moves to close over the next one to two years. They also are beginning to work on plans to relocate more close to 2,000 monkeys, perhaps to some of the seven other national primate research centers. None of the animals will be euthanized, medical school officials said.

The administrators said in an interview that the school’s leadership decided not to reapply for a five-year federal grant that provides the base funding for the 51-year-old institution.

“The decision that we made was a strategic, long-term decision and not based in any way on the problems we had over the last several years,” said Dr. Jeffrey Flier, dean of the medical school. Going forward, “the school would have had to make considerable investments. Those are investments that would not have been able to go in other directions. And when we looked at everything, including the more difficult external funding environment that we all face,” this was the right decision.

This year, the primate center received $27 million in federal funding, but universities are bracing for less federal research funding because of recently acted spending cuts. Harvard Medical School estimates that over the next five years, the primate center would demand an investment of $25 million from the medical school.

Dr. William Chin, executive dean for research, said the decision also focused on “how the center fits into the school’s basic priorities and overall goals.”

Chin said the medical school remains committed to biomedical research with non-human primates. A medical school animal facility with 42 primates in the Longwood Medical Area will continue to operate.

Still, it is uncertain how many jobs will be found for staff and where animals will end up, given that many primate research centers and universities are dealing with the same economic pressures that led Harvard to make its decision.

“The investigators and the animal care staff at New England are outstanding, and yet I don’t know for sure they will all be supported by the system,” said Haigwood, adding that primate centers do not have resources to support many additional animals.

James Anderson, a deputy director at the National Institutes of Health, which provides the major funding for the primate center, said Harvard notified the agency of its plans about a week ago.

“This is Harvard’s decision,” Anderson said in an interview. “We did not expect it, weren’t aware that it was going to happen. We have no indication the other centers are interested in decreasing their capacity or diminishing the work they do.”

Anderson said it is too soon to know whether the NIH will try to use the funds now going to Harvard to help set up a new primate center or redistribute the funds to the other seven primate centers, which are scattered geographically around the country. In total, NIH spends $87 million a year supporting the primate centers’ operation through base grants.

“It’s my understanding that Harvard agrees this is a vitally important area of research. They’ve made an institutional decision — not because of a lack of support for research using monkeys or animal research in general,” Anderson said.

Medical school administrators made a recommendation that the center should be closed to senior Harvard University leadership, and the decision was made with the consultation of President Drew Faust.

“Difficult choices must be made at a time when all of the revenue sources upon which a research university depends are under pressure and the future of federal support for scientific inquiry seems uncertain,” Harvard University provost Alan Garber said in statement.

Deborah Kochevar, dean of the Cummings School of Veterinary Medicine at Tufts University, said she was very surprised by the announcement. Kochevar chaired a panel of outside specialists who reviewed operations at the primate center and issued a report last summer with suggestions for improving operations at the center, and she said Harvard seemed committed to fixing the problems and the future of the center.

“One of the points that the panel that I served on made strongly is that we believed that as one of the oldest primate research centers in the US, as an affiliate of Harvard, that the NEPRC was really looked up to as a model,” Kochevar said. “I think I’m safe in saying the unanimous consensus of our panel was that this was a very important resource for science, as well as for Harvard.”