A lawsuit filed by Worldwide Primates, a Miami-Dade company that imports monkeys for biomedical research, says activists have terrorized employees.

MIAMI — In the name of science, a company called Worldwide Primates imports monkeys from around the globe, providing them to labs across the country researching cures for deadly diseases.

In the name of animal rights, an activist group called Smash HLS has staged protest after protest against the company – not just outside the West Miami-Dade facility but also in front of the homes of its employees and on the Internet.

Now, the long-running confrontations between South Florida primate importers and the activists have boiled over – and are headed to a Miami-Dade courtroom.

Worldwide filed suit last month seeking a permanent restraining order against members of Smash, five months after several protesters were arrested during a protest outside the facility.

The company alleges that Smash members have gone “far beyond” the limits of protected free speech, engaging in a campaign to “intimidate, stalk and terrorize” the company and its employees, according to the lawsuit.

Employees’ identities, photos, home addresses and even divorce records have been plastered online. Bullhorn-wielding protesters frequently rally outside private homes owned by employees, hiding in bushes, trespassing on properties and even pelting cars with rocks, according to the suit. One veterinarian from a similar company reported 500 threatening phone calls to her home in one month.

Similar conflicts have unfolded across the nation and world in recent years as some animal rights groups have adopted increasingly aggressive tactics to protest the use of primates in biomedical research.

Smash members make no apologies, saying they are exercising their free-speech right to protest what they see as an abominable and cruel trade in primates. They insist their members do not break the law.

“We’ve always been very careful to be law-abiding and peaceful in our protests,” said Smash member Nick Atwood. “Most of the time, we’re just standing outside the building chanting.”

Gary Serignese, Smash’s leader, declined to discuss specifics about the lawsuit, but insisted members have never been convicted of any crimes despite several arrests.

“We are going to vigorously fight this lawsuit, and I am going to continue my fight for animals in South Florida,” he said.

Miami-Dade Circuit Judge Beth Bloom will hear the evidence at a hearing Friday.

Named in the suit: nine Smash members arrested over the past several years on charges related to protests, plus 19 other men and women associated with the group. Temporary restraining orders have already been issued against some Smash members who were arrested in October.

If Bloom grants permanent restraining orders, any members who violate it could wind up in jail.

“The use and promotion of research has led to successful treatments for cancer, heart disease, and a plethora of diseases,” the lawsuit says. “It is in the interest of the public welfare to allow testing of new drugs, vaccine development and testing (including vaccines against biological warfare threats) as well as other medications.”

The facility operates “with welfare of the animals as number one priority,” the lawsuit says.

Scientists have long used monkeys and apes as research subjects, as far back as the 1950s, when primates played a crucial role in developing a vaccine for polio.

Because primates are so similar to humans, they remain essential in research, particularly in studying viruses and the brain, said J. David Jentsch, a professor of behavioral neuroscience at the University of California, Los Angeles.

Jentsch, who uses primates in the study of addiction and schizophrenia, said there is a long history of definitive science supporting responsible use of the animals, leaving the “hatemongers” no choice but to “attack the messenger.”

Jentsch, who is not associated with Worldwide, has endured years of protests, including death threats against him and his children and the firebombing of his car. In response, he and some colleagues started Pro-Test for Science, a group that advocates for humane use of research animals, which are mostly bred in captivity.

“The Internet has certainly enabled these people on the fringes of society, whose mental stability is not entirely clear, to come out, communicate to band together and engage in these hate campaigns,” he said.

But Smash and other critics of the research say too many monkeys are mistreated, from when some are whisked away from the wilds, through traumatic cargo flights to the South Florida holding facility and to the lab, where they are often subjected to painful medical tests.

“Every step of the way is a brutal, traumatizing thing for these really sensitive animals,” Serignese said.

Smash HLS began in 2010 as a collection of local animal rights activists targeting companies that do business with Huntingdon Life Sciences, a New Jersey lab that has been a target of activists since the 1990s. 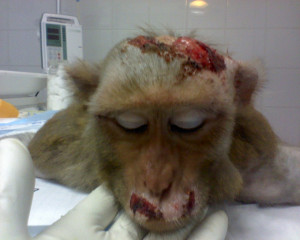 Worldwide was not their first local target. Their first campaign was against a similar company, Primate Products, which last year announced it was closing its live-animal facility in Doral and moved across the state to the rural town of Immokalee.

The Doral closure came after photos of mistreated primates, purported to be taken at the facility, surfaced online and after Smash staged months of rallies.

“That’s one of the things we claim as a victory,” Atwood said.

Huntingdon has been the focus of some of the more extreme protests – and some of the most significant legal setbacks for the protesters.

Most of the defendants, accused of using their website to incite violence against Huntingdon business associates, were sentenced to between four and six years in prison.

In 2010, a group of anti-Huntingdon protesters in England were sentenced to between 15 months and six years in prison for a six-month campaign against the company’s suppliers.

Another high-profile anti-Huntingdon activist is Daniel Andreas San Diego, currently one of the FBI’s most wanted. He is accused of sending three pipe bombs to companies that did business with Huntingdon.

The owner of Worldwide, Mathew Block, also has long been in the crosshairs of animal activists.

In 1992, Block was sentenced to 13 months in federal prison for a smuggling deal that left three orangutans dead. The case sparked international outrage from animal lovers, including Britain’s Prince Phillip and primatologist Jane Goodall, who flooded the judge with letters condemning Block.

He and his lawyers declined to comment for this article.

But his lawyers, Bruce Fleisher and John Sutton, in their lawsuit, say Smash has engaged in a three-year campaign of terror against primate importers. Among the episodes detailed in the lawsuit:

_Members made hundreds of harassing phone calls to employees or associates of importers. A Primate Products veterinarian got 500 calls in a one-month period, many ordering her to leave town.

_In October, protesters began pelting a Worldwide employee’s car with rocks. One member, holding a protest sign, jumped onto the hood – and remained there for two blocks, tearing off the windshield wipers. Three Smash members are still facing charges in an attack that caused more than $4,000 in damage. Others were arrested for disorderly conduct.

_During raucous protests, punctuated with air horns and bullhorns, members frequently trespassed onto the private property of Worldwide employees, once while wearing a blood-stained white lab coat.

_In October 2011, the veterinarian’s husband told police, a protester waited in the bushes outside his house in Homestead, jumped out and yelled for him to kill himself. Unable to enter his house, he ran across the street to a neighbor’s home to call police.

Smash also maintains a detailed and up-to-date website and Facebook page that include photos of Worldwide’s key players.

The lawsuit cited a slew of threatening Facebook postings.

In one exchange, the group singles out John Resuta, the former operations manager for Primate Products who now works for Worldwide, saying he has a “thirst for blood.”

“What a son of a bitch,” wrote one commenter named Susana Raindrops. “He should have his face washed out by acid, as he permits it on the poor monkeys.”

Another commenter mentioned Gertie Block, the 93-year-old mother of Worldwide’s president, who died recently of a heart attack. Protesters had frequently targeted her because she was listed as the company’s secretary. “For those reasons, she is a legitimate target,” one commenter wrote.

“There is no indication that there has been any interference with their business,” Julin said.