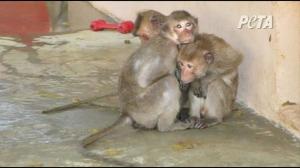 PINECREST, Fla. (WSVN) — Animal activists see it as animal brutality, but companies see the positivity in providing monkeys for research in South Florida.

Activists took it upon themselves to protest outside Pinecrest City Hall Tuesday, as a business owner made his own complaints to keep the activists away from his Pinecrest home. John Resuta’s facility, Worldwide Primates, is also in Pinecrest, and he is asking the Village of Pinecrest to calm the activists down and to prevent them from protesting in front of his house. He said it has just gone too far. “They’ve become more aggressive and they start going into the street. They try to block cars. They try to block people from leaving,” he said.

However, protesters said they have a right to speak their minds and concerns. “We do have a right to speak freely. We have the right to offend, and we’re offended by what these people do, so we have every intention of continuing the protests until we shut them down,” said Kyle Kraków of Smash HLS. “To those who are upset or feel like they’re being disturbed unnecessarily because of the yelling or chanting, I guess I would say that nothing could ever compare to what those animals are forced to endure in labs.”

In an effort to stop the protests, Resuta has asked the Pinecrest Village Council to step in. “We believe in freedom of speech and the right to protest, but just protest the correct way and protest in a public area,” Resuta said.

The pictures and videos of monkeys in their cages being prodded, poked and handled roughly are disturbing, but it’s all in the name of research, and it’s happening right in our back yard. “A lot of folks in Dade County and Hendry County are upset because they don’t want South Florida to become the animal cruelty capital of the country, and that’s what it’s becoming with these labs,” said Don Anthony, of the Animal Rights Foundation of Florida.

There are three facilities in Miami-Dade County that import and breed monkeys to sell to labs around the country. “Shame, shame, shame on you!” protesters screamed. They are frequent targets of animal rights protesters.

In Hendry County, which borders Broward to the Northwest, there are three monkey breeding farms with thousands of monkeys, but researchers are trying to open a fourth facility. “Hendry County is very convenient because it’s in the middle of the Everglades,” Anthony said. “It’s in a very remote location. No one really knows the facilities are there.”

Upset residents and the Animal Legal Defense Fund have filed a lawsuit against Hendry County, trying to keep the fourth facility from opening. People for the Ethical Treatment of Animals (PETA) has released a disturbing video of the animals. “Our investigation documented a hell hole for these animals,” said Don Paden, of PETA.

They sent an employee undercover who shot a video at one of the Hendry County facilities, and they turned over what they found during the eight-month probe to the U.S. Department of Agriculture. “They’ve now issued an inspection report that cites the company for 25 different violations,” said Paden.

Resuta said he didn’t have any of those violations. He said he has a clean record with the U.S. Department of Agriculture and when checked, it was verified that his record is clean in the past couple years.

Residents in both Hendry and Miami-Dade are worried about the conditions at the facilities as well as the lack of sewer systems. It brings up concerns about where the waste ends up. “I don’t know about you, but I don’t want thousands of pounds of monkey poop going into the fresh water system that we all have to drink,” said Anthony.

There are also concerns about what could happen if monkeys escape into South Florida neighborhoods. “Things like Herpes B could be transmitted to human beings and could be potentially deadly,” said Paden.