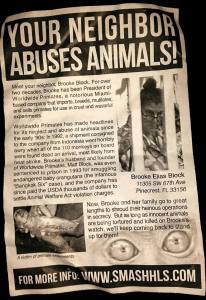 After a slew of animal-rights activists and police filled Pinecrest Village Hall on Tuesday, council members voted 4-1 to reject a proposed ordinance to restrict protests in residential areas.

The ordinance would have banned picketing “before or about the residence or dwelling of any individual in the village” and also would have required prior notice of protests by groups of three or more people.

“I don’t think we need to do this, I don’t sense urgency here,” council member James McDonald said. “Right now, I don’t see it as a crisis. I think we’re just dealing with a topic that doesn’t rise to a level of having to do something. Two or three incidents a year is not enough for us to change our ordinance. It’s premature.”

Village residents Matt and Brooke Block requested the ordinance in April after being the targets of several recent protests by animal-rights activists.

The couple own a company called Worldwide Primates, a supplier of monkeys for research. A series of violent protests at their South Dade facility ended in nine arrests. A number of rallies also occurred in front of the Blocks’ Pinecrest home, with protestors at the door yelling through bullhorns, “Shame, shame, shame on you” and “There’s blood on your hands.”

“Instead of protecting tax-paying residents, the commissioners, except for the mayor, chose to cave in to the pleas of a handful of protesters, virtually none of whom are residents of Pinecrest, let alone Dade County,” according to an email statement on Thursday from the Blocks. “The protesters may claim to be peaceful when the police are present, but take on another tone when they are not, as evidenced by multiple videos they proudly post on social media and was shown at the village meeting.”

Worldwide Primates is one of the largest importers of monkeys for research and testing in the United States, including government, university, and pharmaceutical fields. Founded in 1980, it has sold tens of thousands of monkeys to vivisection labs. It supplies primate sera, plasma, blood, and tissue products from species such as cynomolgus monkeys, rhesus monkeys, baboons, African green monkeys, capuchin and squirrel monkeys.

In 1993, Matt Block was sentenced to 13 months in prison for smuggling endangered baby orangutans.

Last year, according to Block, protesters sat outside their house and then followed Brooke to a relative’s home, also in Pincrest, where they “ambushed” her.

The Blocks were not present at Tuesday’s council meeting. John Resuta, Worldwide’s operations manager, attended on behalf of the family. He showed footage of past protests at the Block home, at the company facility, and videos of protesters at the homes of veterinarians.

“This is about preserving the sanctity of the home,” Resuta said, adding that the company is misunderstood. “The use of animal research is required by law. Who here wants to be vaccinated with an untested vaccine or given untested medicine?”

Resuta said he has had protesters on his doorstep more than 15 times, greeting him with statements like: “Come outside, John. I want to give you a hug, a hug with knives.”

“Those are very small snippets of a some ‘peaceful protests’” he said. 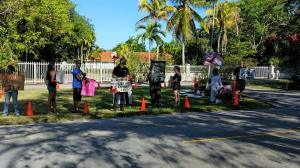 Lerner was the only council member who agreed with Resuta and voted yes for the ordinance. She stressed that it would have given police ample time to accommodate staffing needs for protests, preventing surprises. She added that it would give residents a feeling of well-being, privacy and safety while protecting their constitutional rights.

“This is about assuring the peace and tranquility of our residents,” Lerner said. “To not make children and wives and family members afraid of coming in and out of their own homes. This is why the ordinance was crafted the way that it was.”

But many of the speakers who approached the podium called the council out on the “vagueness of the ordinance.”

“You’re just a little town,” said Rachel Kieske of Lake Worth, Florida. “And this is a pretty hefty ordinance with big consequences. All for yelling at a house, all for protecting one person? Doesn’t sound very democratic. The ordinance is not just short but incredibly vague. I don’t want to help you write this ordinance, but I don’t think its gonna hold up.”

Many of the council members agreed. They were referring to section 3B of the ordinance which said: “No person shall engage in picketing before or about the residence or dwelling of any individual in the Village.”

They argued that the language doesn’t specifically say how far from a residence, and that it could provoke protesters to shout from neighbors’ yards instead. They also said the language could be construed that protests in residential areas would be illegal altogether.

“I don’t want to push this; it seems very vague,” council member Doug Kraft said. “I don’t like that vagueness. Let’s not push this on the neighbors.”

The next council meeting will be 7 p.m. July 7 at Pinecrest Village Hall, 12645 Pinecrest Pkwy.