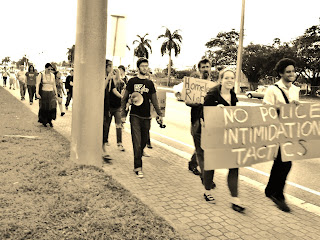 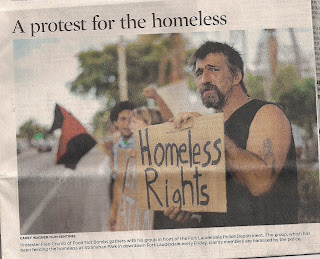 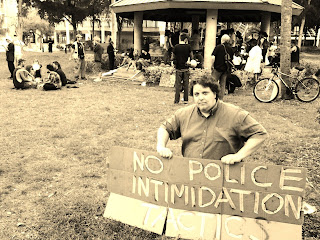 “In response to the police command tower centered in Stranahan Park, and the recent raid of the home of Food Not Bombs activists on February 17th, members of the community coordinated a march against police intimidation tactics in Fort Lauderdale on Friday, February 25th. Many different community organizations have begun to see eye to eye in their observation of what has motivated recent actions by the Fort Lauderdale Police Department. This, of course, includes Fort Lauderdale Food Not Bombs, who conduced Friday’s march. Speaking generally, the purpose of the event was to show that people are willing to work together and fight in solidarity against repressive, intimidation tactics by the city government. Speaking specifically, the activists hope to ward off any future police raids on political activists, and have the police command tower removed from Stranahan Park.

At about 4:00PM, activists visited both the FLPD Headquarters and the City Hall to deliver a statement of solidarity to the mayor, the city commisioners, and the police. The statement of solidarity was not hateful toward the police or the city, but rather was a message of concern about the conflicts, with signatures from Keith McHenry (co-founder of Food Not Bombs) and a list of other groups showing their support.

At around 4:30PM, around 40 protestors marched downtown under the banner “NO POLICE INTIMIDATION TACTICS”. There were many other signs as well regarding homeless advocacy and the activists’ right to free speech. The activists stood outside the FLPD Headquarters for almost an hour, before marching back to Stranahan Park for the weekly Food Not Bombs sharing. A few cars inching through the rush hour traffic stuck their fists out the window, honking their horns in support. The Raging Grannies also shouted into the megaphones; contributing to the passionate, energetic demonstration with a song they wrote about the recent police raid.”

One thought on ““No Tower, No Raid; We’re Here to Show We’re Not Afraid””