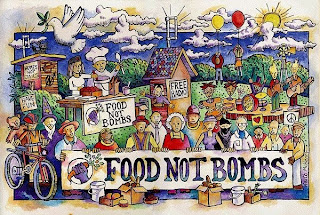 In the recent five months, tensions between the Fort Lauderdale Police Department and Food Not Bombs activists have escalated. Within this time, The FLPD has not only prevented multiple groups from sharing in Stranahan Park, but has installed a police surveillance tower in the park amidst repeated verbal assault against Food Not Bombs activists.

On Thursday, February 17th, an FPL electricity inspection led to the power being turned off at the home of activists frequently the target of police harassment. The electricity bill had been paid prior to this. Several hours later, all tenants had left the house while a few guests remained. During this time, an unwarranted police raid took place under the premise of ‘uninhabitable’ living conditions. The house was deemed ‘uninhabitable’ due to the lack of electricity, which had been turned off that morning. House guests were pulled from the house and searched by over a dozen officers, who kicked in unlocked doors and, with a K-9 unit, searched the house with no specific intent. One female guest was frisked and inappropriately touched by a male officer. More troubling still, officers were questioning the political orientation of the house guests. They asked if the house was a ‘militant training camp’, and whether or not the guests were “terrorists” or affiliated with “black bloc”. Before the FLPD left the house, they threatened to repeat raids weekly.

The Food Not Bombs activists in Fort Lauderdale are not involved in any of the activities suggested by the police. Rather, activities organized out of the house include free bike repair, FNB gatherings and sharing of food with the homeless, animal rights activities, candle making workshops, foreclosure & civil rights activism, etc. We, Fort Lauderdale Food Not Bombs, strongly condemn the intimidation tactics which include the police surveillance tower in Stranahan Park, unwarranted police raids, and the criminalization of community activism. Broward County officials have already targeted the poor and disenfranchised. Now the range has been expanded to include those who dare to help them. We call on South Florida activists to stand with us in solidarity as we struggle against the city’s efforts to repress the homeless and community-based activism.

UPDATE: Fort Lauderdale Police returned to the activists home on Saturday, February 19th at around 9:00PM. The two officers did not attempt a repeat of Thursday’s raid, but rather briefly insulted and intimidated one of the tenants and their guests. The police entered the house, with permission from the tenant but then left shortly afterward.