In solidarity with Operation Amerijet, around twenty dedicated activists gathered to protest at the Amerijet International HQ.

Amerijet ships primates from the Caribbean to die in cold laboratories as victims of vivisection. This is something the activists were not afraid to say and they made it known to everyone passing by and specifically to those working for these killers.

It was the second day of our two day call to action against Amerijet. On this day, the activists noticed peaked interest from passers-by, with cars stopping in the street to 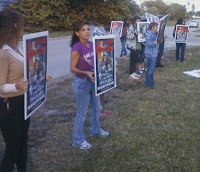 ask what was going on. Their faces plainly showed their reaction to the news; when they learned Amerijet kills hundreds of monkeys annually, they were horrified.

As with the day before, in front of Pam Rollins’ home, there were two creepy men silently standing at a distance with a noise amplifier and a camera high on a tripod following our movements. The cold compliance of these men and the other paid guards of Amerijet will have no effect on the efforts of dedicated and caring activists. 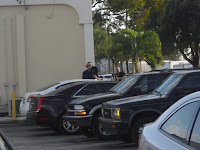 At the end of the day, many leaflets were passed out to concerned people and much pressure was applied to those who attempt to profit from the torture and mutilation of innocent animals. Protests will continue until Amerijet stops the transport of primates for vivisection.