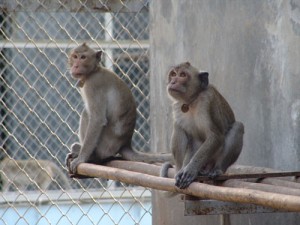 China is the world’s leading exporter of primates destined for laboratory research. Over 14,000 monkeys were shipped from China to the U.S. last year. The majority were crab-eating macaques (macaca fascicularis), a species that is not native to China. Although large numbers of monkeys are bred for export inside huge monkey factory farms in China, there have long been suspicions that crab-eating macaques are trapped in the jungles of nearby countries like Cambodia, Laos or Vietnam (countries with weak enforcement of wildlife protection laws) and then transported into China, where they are passed off as “captive-born” to evade international regulations.

Macaque monkeys reach sexual maturity at 3-5 years old, and females generally give birth to one infant per year. When a company that did not exist until a few years ago is exporting hundreds of monkeys that they claim are “captive-born,” it raises red flags.