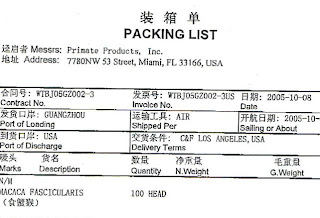 SHAC has received a number of leaked documents detailing the purchase of hundreds of monkeys from China by Huntingdon Life Sciences between 2006-2008. The documents reveal, once again, how HLS and its customers are directly responsible for the horrible suffering of monkeys trapped for the international primate trade.

The documents include contracts, invoices, U.S. Fish and Wildlife Service import permits, animal health certificates issued by the People’s Republic of China, shipping routes, contact sheets, and miscellaneous e-mails (such as correspondence about a December 2007 trip to Florida by three HLS employees from the UK and US to tour Primate Products, Inc.’s quarantine facility and breeding farm).

Below is some of the information contained in the documents:

2 – A typical shipment of monkeys from China to HLS labs in New Jersey:
100 Cynomolgus monkeys, shipped 4 per crate, arrived in Los Angeles on October 26, 2005 following a 13.5 hour flight from Guangzhou, China (China Southern Airlines, flight #CZ327). The monkeys were then trucked from Los Angeles to Miami, Florida, arriving on October 29. In Miami, the monkeys completed quarantine and were again packed into boxes for the trip to their final destination: HLS laboratories in East Millstone, New Jersey.

Supplier note: “We certified that the 100 Cynomolgus monkeys are all born and bred in our center and are entirely consisted of at least the second generation purpose-bred offspring.”
[Editorial comment: A 2008-2009 investigation by Animal Defenders International found that every year thousands of monkeys are violently captured in the wild to restock breeding colonies in Asia. The offspring of these monkeys are sold as “purpose-bred.”]

3 – The transfer of imported monkeys to HLS continued into 2008:
Excerpt from March 15, 2008 e-mail from Primate Products, Inc.: “Animals leave tomorrow for Huntingdon” (24 monkeys were included in the shipment).

SHAC is continuing to read through the leaked documents. More details to come!

One thought on “Primate Products, HLS, and the Cruel International Primate Slave Trade”