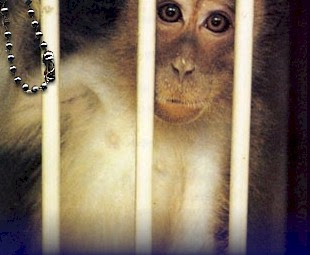 Animal exploitation companies and their politician lackeys have, through corrupt legislation, legalized cruelty and murder. They have attempted to destroy our feelings of compassion for those who suffer and they have attempted to subvert our treasured moral principles. They have criminalized effective defense of the animals and the earth. And they have created the infrastructure to police thoughtcrimes. Meanwhile, tens of millions of animals are murdered every single day. Their precious lives and their pain-filled deaths are believed by many to be hardly worth a thought. Much less an action. What are we to make of this? What are we to do? While they suffer…while they die?

One cannot exaggerate the evil that animals face on a daily basis. In fact, language stumbles at the enormity of the pain and suffering they endure. Our words cannot capture, cannot come close to capturing, the abject horror of the animal abuse facilities. What words truly express the experience of an animal murdered in a slaughterhouse? How does one describe the experience of an innocent animal encaged in a laboratory, her bodily integrity violated, her life utterly disrespected? Our words are inadequate. They are insulting.

Let us briefly listen to the life story of rhesus monkey #3566. “Animal #3566” was a female rhesus monkey abused and killed in a “MPTP-induced Parkinson’s disease study.” On a daily basis she was subjected to a level of disrespect incomprehensible to the compassionate. MPTP is “a neurotoxin that causes permanent symptoms of Parkinson’s disease by destroying dopaminergic neurons in the substantia nigra of the brain.” Animal #3566 was given weekly injections of MPTP. After dozens of these abusive injections, she was noticed to be exhibiting “clinical problems.” In a short time, she was found “near death.” Staff was able to revive her for a time, but the next day “it [sic] was found dead in its [sic] cage.”

As I read over this all too brief description of her life, I am ashamed at its inability to grab you, to shake you, to help you realize the evil she suffered. My description is flat, antiseptic. Her suffering and death were real and avoidable.

What is an appropriate response to all of this? What does ignoring it make us? Even clearer, what does defending it make us? These types of rhetorical questions provoke different responses in different groups of people. Our group, for instance, organizes legal demonstrations. We intend to educate the public about the immorality of vivisection and put direct pressure on animal abusers to put an end to their participation in these unspeakably barbaric activities. Other groups, on the other hand, find this method insufficient to deal with such a grave and urgent evil. They engage in controversial actions involving direct action in many diverse ways. Although we never engage in activities of this sort, we feel it is important to notify others that some do and provide a moral framework from which to understand their actions.

Bite Back recently reported an arson that occurred at a poultry factory farm under construction in Germany. “The entire building collapsed. Property damage is estimated at €500,000.” The motivation for the action was described in an anonymous communique. It reads in part, “Non-human animals are viewed and treated merely as a resource. For example, in zoos and circuses, as pets, for fur, leather, meat, eggs and dairy, animal testing, etc. All their needs, feelings and desires are denied them. They do not have the freedom to be in charge of their own lives. This operation was carried out in order to directly save lives, as all previous discussions and arguments had failed.” And, “As long as non-human animals are subjected to the domination of humans, all animal exploitation enterprises will be the target of similar actions. This action shows how animal abuse can be confronted directly.”

We see, then, the answer this group gives to the questions I asked earlier: What are we to make of this? What are we to do? While they suffer…while they die? Considering the absolute urgency of the issue (this is life or death) and the abominable evil being combated, which response seems more adequate, our group’s legal protests or the activities of groups like the ALF or ELF? What would you answer if you were “animal #3566”?

3 thoughts on “While they suffer…while they die”