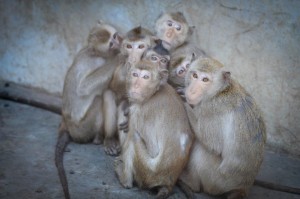 Thousands of monkeys are being held in overcrowded and barren farms in Laos and sold for international laboratory research, according to a report from a British animal protection group.

Laos has exported nearly 35,000 long-tailed macaques since 2004 as part of a fast-growing trade in the species for research, the British Union for the Abolition of Vivisection (BUAV) said in a statement released Monday.

The “appalling conditions and treatment of monkeys inside the breeding farms… breach internationally recognised animal welfare guidelines,” the BUAV said, following a field investigation and talks with primate company owners. 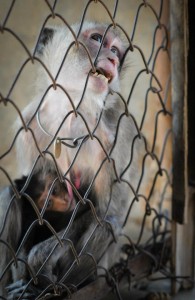 “Some monkeys were found dead in their pens, while others were severely emaciated and/or suffering from severe hair loss and injuries,” BUAV said.

The monkeys in the Laos farms were being sold to companies in China and Vietnam, which then supply primates to laboratories in the United States and Europe, the report alleges.

The species is among the most commonly used animals for laboratory research.

There are concerns that some of the monkeys at the Laos farms could have been taken from the wild as there is insufficient regulation, said the report, whose findings were backed up by other animal protection groups.

“It is always cheaper to take animals from the wild than it is to breed them,” Chris Shepherd, deputy director of Southeast Asia for conservation group TRAFFIC, told AFP.

“The profit margins are huge (and) the money they’re raking in is going to be very significant,” added Shepherd, who has visited Chinese-run monkey farms in Laos. 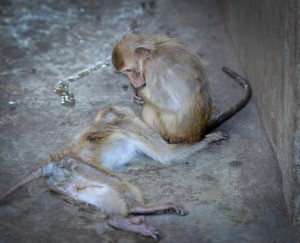