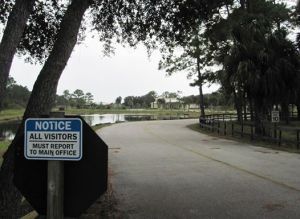 Seven animal rights activists from South Florida were arrested over the weekend on a road trip to protest the growing number of facilities in rural Hendry County that breed monkeys for scientific research.

They were on a tour organized by South Florida Smash HLS, a group that engages in confrontational tactics such as demonstrating at the homes of company employees and their relatives.
They came to Hendry County to call attention to the county’s increasing importance in the nation’s primate trade, with two major monkey-breeding facilities in place, a third under construction and a fourth reportedly moving there from Israel.

“Here they are building this empire and they have no consequences, no one to protest,” said Gary Serignese, a leader of South Florida Smash HLS, named for Huntingdon Life Sciences, a major target of animal rights groups. “These are the places that supply helpless animals to the rest of the U.S. These animals are suffering in a horrible way, and they know they’re suffering.”

The Hendry County Sheriff’s Office says the group was trespassing on private property. Arrest reports state they arrived in a van and a Ford Fusion sedan, parked and walked past posted “No Trespassing” signs. Although there was a call box for visitors, the report states they did not use it.

Joseph Wagner, vice president and director of The Mannheimer Foundation Inc., one of the companies breeding monkeys, witnessed their arrival and said he wanted to press charges, the reports state.

Mannheimer’s facility’s holds 863 crab-eating macaques and 1,535 rhesus macaques, according to company’s Sept. 11 inspection report from the U.S. Department of Agriculture. The report stated that there were no violations in their treatment of the animals.

A person who answered the phone Tuesday at Mannheimer took a message for Wagner, but he did not call back.

In addition to Mannheimer, Hendry County has a large breeding facility run by Primate Products Inc. of Immokolee, and another, Primera Science Center, under construction.

Serignese gives a different version of events. He said the sheriff’s deputies were clearly waiting for them, having known in advance the tour was taking place.

At Mannheimer’s site, he said the group walked up the driveway and did not see any “No Trespassing” signs, just a sign saying visitors should go to the gate and use the call box. Contrary to the Sheriff’s Office version, he said he did use the call box, leaving a voice mail that the monkey tour protesters had arrived.

He said 10 to 12 deputies surrounded them. Their vehicles were impounded and they were released after a few hours. All seven have been charged with first-degree misdemeanors. A hearing has been set for Jan. 20 in LaBelle.