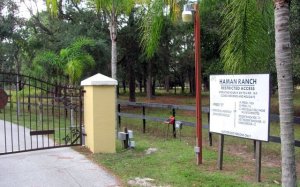 HENDRY COUNTY, Fla. – The animal activists say they were walking back to their cars when the cops came rushing in from out of nowhere.

Hendry County sheriff’s deputies arrested seven men Saturday and charged them with trespassing outside the gates of the Homestead-based Mannheimer Foundation’s monkey breeding farm off State Road 80 between LaBelle and Clewiston.

The men were part of a kind of rolling protest tour organized by Smash HLS, a group that has been an increasingly sharp thorn in the side of the monkey breeding industry in South Florida.

The arrests raise the stakes on an already litigious fight over Hendry County’s bid for a larger stake in the U.S. supply chain for medical research monkeys.

Before the stop at Mannheimer, a larger group of 13 people had stopped at a Primate Products monkey farm and training site and also at a planned new farm called Primera Science Center, said Atwood, campaigns manager for Animal Rights Foundation of Florida.

They had brought protest signs but didn’t use them because nobody was around to see them, Atwood said. They instead took photos and looked around, he said.

At the third stop, at Mannheimer, Serignese said they pulled up a driveway, parked their cars and walked up to the gate. Serigness said he pushed a button on a call box at the gate to announce the group’s arrival. They got no reply and turned around to leave.

That’s when about a dozen deputies showed up, some from inside the gates, told the men to sit on the ground and bound their hands behind their backs with zip ties, Atwood said.

“It was very odd, but it was obvious they were prepared for us the whole day,” he said.

In arrest reports, deputies say the group drove past “No Trespassing” signs. Serignese said there were none. Deputies also said nobody used the call box.

Smash HLS, named for animal testing lab Huntingdon Life Sciences, one of the group’s first targets, credits its protests with forcing Primate Products to move from Doral in Miami-Dade to Hendry County.

Worldwide Primates, a Miami-Dade monkey importer, sought a permanent restraining order against members of Smash in 2013 after the group targeted employees’ homes — including the home of the founder’s 93-year-old mother. A judge turned down the request.

The weekend arrests in Hendry County come as animal rights activists have filed a lawsuit to try to stop the new Primera Science Center on the grounds that the approval violated the state’s open meetings laws, commonly known as the Sunshine Law.

An Israeli newspaper has reported that that country’s last monkey farm, Mazor Farm, is preparing to ship 1,300 monkeys to the Primate Products farm ahead of a January 2015 ban on monkey exports.