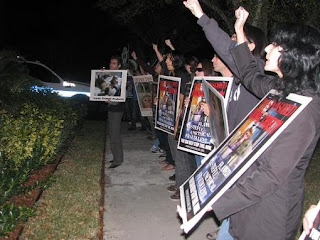 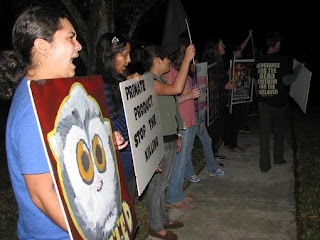 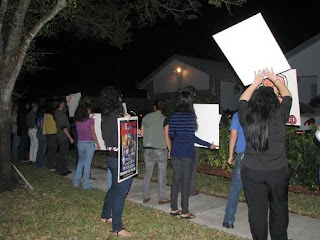 About 30 animal-rights activists gathered on the sidewalk outside the Plantation home of an Amerijet executive last night to protest the company’s policy of transporting monkeys for animal research and the fact that they do business with Primate Products, a controversial South Florida research facility.

For two hours, the protesters held signs, shouted in the direction of the home, and told neighbors about some of Amerijet’s policies. To describe what has been done to monkeys, they used terms like “murder” and “mutilate” and “torture”. A camera crew filmed the demonstration from the front yard.

There were two Plantation police officers on the scene for the duration of the protest to make sure activists stayed on the sidewalk and did not step onto the private property. One officer puffed a cigar as he watched the scene play out.

The Fort Lauderdale-based shipping cargo airline sent a letter to activists a few weeks ago stating that the company will not stop shipping monkeys, insinuating that the protesters may be violating national terrorism laws. One protester was arrested recently during a demonstration at the company’s headquarters.