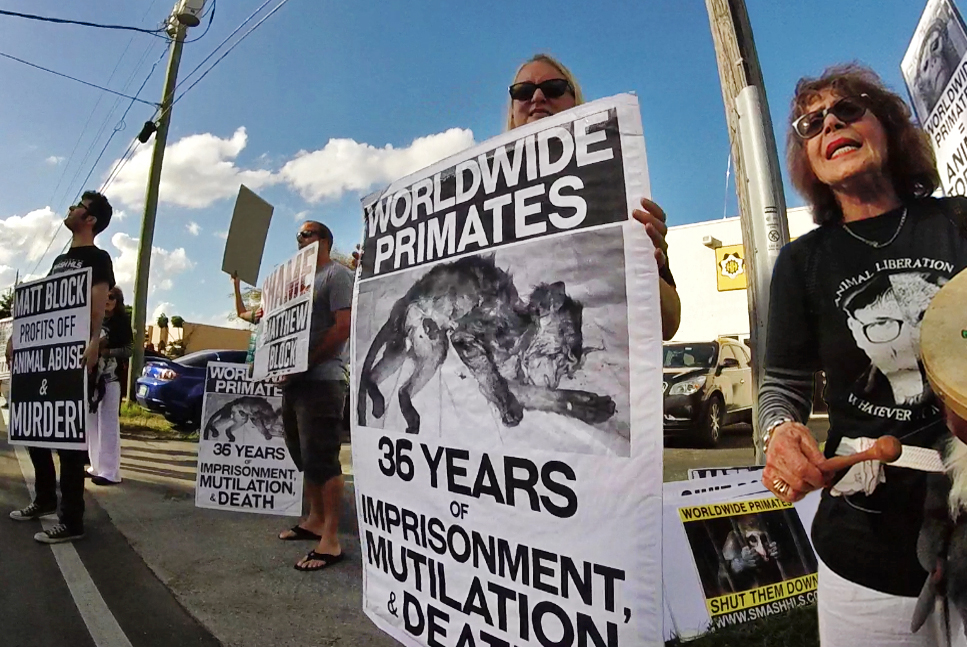 A shiny new pickup truck, a cocky air, and the lingering stench of death. These are the things that stood out about long-time monkey killer John Resuta when two Smash activists caught up with him at the Worldwide Primates quarantine facility back in October. When we returned on Wednesday as a crowd of protesters 20 strong, John was there again with his truck and signature aroma, but his smug smile was nowhere to be found. Funny how that works, isn’t it?

Activists from as far north as Jacksonville converged in Doral to give the animal abusers of WWP an official welcome. We were met by nearly a dozen cops and a few curious locals, some of whom remembered us driving Primate Products out of the same building back in 2013. The employees had gone home hours early to avoid exposure leaving Resuta to weather the protest. Apart from the agony-stricken monkeys he imprisons, the only company John had was Barry Reaves of RTS Electric and one of Barry’s assistants (more about them soon).

For the first time in years, we filled the industrial streets of Doral with passionate calls for animal liberation. Between chants we swapped protest stories, some tense and some hilarious, about the old Primate Products campaign. We emboldened ourselves, knowing that we had won before and could win again. We thought of the countless animals whose lives have been violated and heartlessly snuffed out by profit-driven corporations like Worldwide Primates. We thought of all those animals, and we turned our volume up—way up.

When Resuta came outside and drove away, we reminded him of the monkey blood on his hands: Shame on you, John! How do you sleep at night, animal killer? Heartless monster! Much to his dismay, the Doral police seemed especially careful not to interfere with our First Amendment rights. (Maybe it’s because they heard rumors of a certain ex-sergeant’s legendary flub at the same location.)

It wasn’t over. John must’ve been so overcome with shame that he forgot something inside because he came back just when activists were about to part ways. And then, as he was preparing to make his final escape, CLANK! The electric gate his company paid so much for rammed into his new Ford F-150!

All in all, Wednesday was a success. We disrupted another workday at Worldwide Primates, discovered one of the company’s service providers, left an impact on John Resuta, and made lasting connections with more activists who are committed to achieving concrete victories for the victims of animal experimentation.