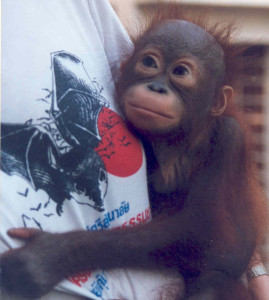 Join Smash HLS as we welcome the Open The Cages Tour (https://www.facebook.com/OpenTheCagesTour) to South Florida with a protest targeting Miami-based Worldwide Primates.

During a recent phone conversation between Smash HLS and Primate Products’ founder/CEO Paul Houghton, he suggested that there were other monkey dealers in Florida more deserving of protests. Houghton didn’t name names, but we’re almost certain he was talking about Worldwide Primates.

Join Smash HLS and the Open The Cages Tour for a protest at the home of Gertie Block, the long-time Secretary/Treasurer of Worldwide Primates, Inc.

Worldwide Primates has been operated in the name of Block family members ever since Gertie’s son Matt was convicted in 1992 of smuggling endangered baby orangutans– the infamous “Bangkok Six” case (one of the orangutans rescued by wildlife officials is pictured above; four others died).

Matt Block’s felony conviction and 13-month prison sentence has made him toxic for many pharmaceutical companies and other potential customers, but some companies only care about buying monkeys at the cheapest price possible, regardless of the source. Since his release from prison, Block has managed to make a living in the dirty business of importing and selling monkeys for vivisection thanks to Novartis, CiToxLAB and other Worldwide Primates customers. In 2012, Worldwide Primates imported over 1,000 monkeys from China, Cambodia, St. Kitts & Nevis and other countries for sale to laboratories.

P.S. Just in case Paul Houghton is reading this, our July 13 protest may only be a temporary shift of focus away from Primate Products!