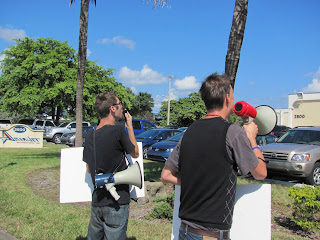 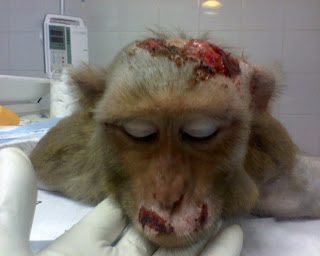 On October 22nd, a loud group of activists gathered in front of Amerijet International HQ (2800 S. Andrews Ave. Fort Lauderdale, FL) to strongly condemn the companies unethical involvement in the cruel primate trade. Amerijet is one of only a few airlines that still transports primates to be used and abused by the sadistic vivisection industry. They have transported primates from the islands of Saint Kitts and Barbados, and elsewhere in the Caribbean and South America, to the United States. The shipments were for companies, such as Primate Products, Inc. and Worldwide Primates, that provide primates to laboratories. It is obvious their greed knows no bounds. For they have needlessly involved themselves in the torture and murder of defenseless primates.

We will not relent. We will continue to protest Amerijet until they end their sick role in the transportation of primates. Amerijet, do what’s right! Stop the primate transports or you’ll continue to be protested!