Between July 2010 and August 2011, Battelle purchased 180 monkeys from Primate Products.

Posted by Shut Down HLS LA 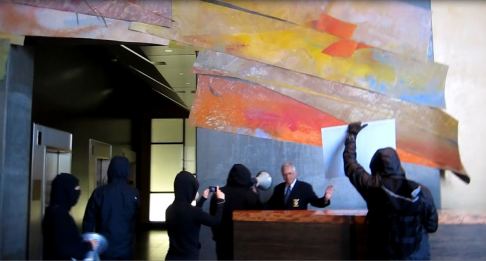 May 22nd San Diego activists visit Battelle at their office in downtown San Diego! Before the demonstration got started one activist went up to Battelle’s office to talk with the manager about their business relationship with Primate Products.  The activist notified him why we were there, and told them that they should strongly consider ending their relationship with Primate Products.

Minutes later, around 10 activists walk into the front doors wielding no less than 6 megaphones. They told Battelle that as long as they are customer of Primate Products they will have to deal with San Diego activists confronting them at their offices. They shouted chants such as “vivisection is a lie, how many animal have to die?” and ” stop the suffering stop the pain, Battelle corporation is to blame!” They protested inside of Battelle’s lobby for at least 5 minutes before leaving.  It was clear that Battelle got the message. Activists left chanting “we’ll be back, and we always win!”

Unless Battelle makes the compassionate decision San Diego activists will be paying them another visit in the very near future!

One thought on “Battelle, a Primate Products’ Customer, Protested in San Diego”